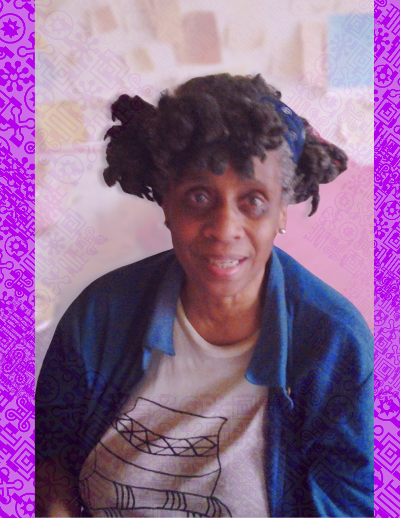 Joanne Amber Brown was born on February 20, 1951, in Harlem New York to Catherine and James Brown. She and her twin brother, Edgar Brown, were the eldest of the Browns’ four children.

In 1986, Joanne welcomed her son, Kwame. She loved Kwame with all of her heart and instilled in him her passion for learning and commitment to education, and inspired her only child to earn bachelor’s and master’s degrees in chemistry, from North Carolina A&T State University and Purdue University, respectively.

Joanne served the U.S. Department of Transportation for over 10 years. She once recounted that her job was boring. So, in her idle time, she created a video library for DOT’s records management department. This is only one demonstration of Joanne’s creativity and hard-working nature. She also loved educating others on the topics about which she was passionate.

In 2008, Joanne was diagnosed with multiple sclerosis, known as M.S., which is an auto-immune disease that attacks the brain. Typically, people suffering with M.S. take drugs to prevent full paralysis. Joanne decided not to go this route. To know Joanne is to know she believed in holistic living and natural medicine. She did not trust the side effects of the prescribed drugs and did not want to place herself at risk. Despite many of her loved ones encouraging her to take the medicines, Joanne was determined to do things her way. To her credit, her commitment to her own health helped her remain mobile and independent, needing only a cane and an occasional helping hand. She enjoyed her life in her home with her cats and her talk radio and favorite TV shows, and looked forward to holiday meals on P Street at the home of her dear friends Ollie and Tom Allen. Despite her physical challenges and, honestly, in spite of them, Joanne continued to “JAB” (Joanne Amber Brown) at life and never ceased to smile, laugh, teach, and love.

On February 9, 2021, eleven days before her 70th birthday, Joanne Amber Brown transitioned to her higher realm. Her legacy is her son Kwame (Sevetra). She is also survived by her two younger brothers, Charles Brown and Alfred Brown (Geraldine); her nieces and nephews; her earth sisters, Olive “Ollie” Allen and Marchelle Minerve; many godchildren, loved ones, extended family, friends, and her loving cats Organgey and Tiki.

Joanne once owned a house in Seat Pleasant, Maryland, with some college friends. They rented the home out to an at need family. Despite her modest income and lifestyle, over 40 years, she donated to nearly 100 charities  on a regular basis,  including organizations that served political interests, animals, wildlife, environment, health, education, humanitarian and economic missions, and progressive media.

Joanne once took a trip to California to visit her friend. Although she’d never been to California before, she took her friend’s daughter on an all-day trip to the beach. On the way home, it is believed that Joanne became lost (though she never admitted it) but found her way. Today, that little girl is a physician.

Joanne laughed at the corniest jokes. Joanne had a laugh that could fill up a room and a smile that was so sweet and precious.

At age 37, Joanne learned how to drive, got her driver’s license, and drove from DC to New York to take Kwame to meet his great grandmother as her dying wish.

Joanne loved all types of food including Ethiopian, Caribbean, Southeast Asian/Indian, and especially Ollie’s and Marshell’s cooking. Joanne’s afrocentricity was reflected in her love of African arts and literature. She enjoyed music, especially classical, jazz, gospel, opera, old school rhythm & blues, and reggae. She really loved Sam Cooke and Bob Marley. As a long-time DC resident, Joanne was a mainstay at DC festivals like Future Fest, Caribbean Fest, Stone Soul Picnic, and Adams Morgan Day. In better days, you’d be sure to see her on any given sunny Sunday with the African drummers in Malcom X Park.

Joanne was an avid writer. She wrote on topics and subjects that she loved including African and African-American history, politics, and liberation.

Joanne walked everywhere! She would walk from DC to Virginia to go to work and walked all over DC, and along the way, she never met a stranger. It was on one of these walks in ‘86, with her then two-weeks-old Kwame, that she passed a brownstone on P Street where she met Ollie Allen, who stopped her to ask about the age of the baby. Ollie had just given birth to her daughter Ashley the week before. From that day forward, the two families began one of Joanne’s most sacred traditions, their Sunday dinners.

Joanne’s love for African history served as a driving force for her willingness and determination to empower the community in whatever way she could. Her understanding of ancient African teaching and healing allowed her to overcome her life's darkest challenges. Joanne also understood Africa to be the mother of all creation and, therefore, the responsibility to care for all of Earth was the primary responsibility of African peoples. This sense of responsibility was exemplified by the over 100 diverse charities she gave to annually. Joanne also attended Imani Temple African-American Catholic Congregation, pastored by the Reverend Fa. George Augustus Stallings, Jr., which was an “African revolution of faith” in which Joanne wholly believed. She and Kwame faithfully attended mass weekly. Joanne and Kwame walked there—together.

To send flowers to the family or plant a tree in memory of Joanne Brown, please visit Tribute Store
Saturday
20
February