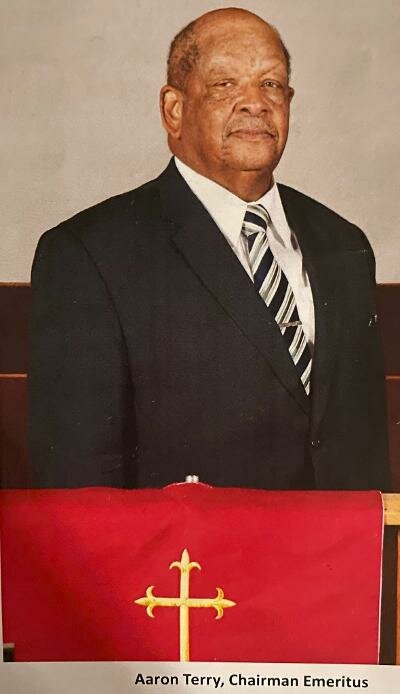 Deacon Aaron Conrad Terry Sr., was born on February 12, 1935, in Merrifield, VA.  He was the eighth of twelve children born to the proud parents of Deacon Everett Curtis Terry and Deaconess Edith Collins Terry (both deceased).  He transitioned to eternal rest on Sunday, June 5 at his home with his wife and children in Arlington, Virginia.  Preceded him in death were two children, Aaron Jr., (Junie) LaWann Terry and seven siblings.

At an early age, Aaron accepted Jesus Christ as his Lord and Savior.  Aaron was a faithful and dedicated member of First Baptist Church of Merrifield and was very active.  His service included Sunday School Teacher, Gospel Messengers and Men’s Chorus, Assistant Financial Secretary, Helping Hands Club, Trustee, Deacon, Chairman of the Deacon Board and Chairman Emeritus.  He attended the one-room elementary school in Merrifield and Manassas Industrial High School.  His hobbies included gardening, hunting, fishing, real estate, and watching westerns and wrestling.  He enjoyed buying used cars to work on and sell.  Aaron liked “Old Gospel Songs”.  He was a man of wisdom who inspired and encouraged those who looked up to him for guidance.  A good husband, father, and provider who continued to ensure the family was aware of his personal and business matters even on his death bed.  He was in heaven when his children were around.  There were those that were not his biological children who called him Pop or Dad.  Some of his favorite sayings were “Give God Some of Your Time,” “One Day at A Time,” “Take All You Want – Eat All You Take” and “Save Some Money for a Rainy Day.”  He was and will remain honored and loved by many.

Aaron began his career as a clerk at a Drug Store while in high school.  He served for 31 years at the Washington Gas Light Company (WGL) as a Laborer, Truck Driver, Maintenance Man, Foreman, Area Foreman, Instructor, Inspector Foreman, Dispatch Supervisor, Night General Foreman.  He retired as a General Foreman in the NW Station in Rockville, MD in 1989.  He was labeled as the “Brown Bomber” by some of his employees because of his firmness and fairness in work ethics.  Many furthered their careers due to his leadership.

Aaron leaves a legacy of prayer, love and service for God to his family, friends and church family.  He leaves to cherish his memories a devoted wife of 69 years, Shirley Biggs Terry; one son Wayne (Deborah); two daughters, Charlene Terry and Darlene Whitaker; daughter-in-law, Dorothy Terry; four siblings (Apostle Barbara Vaughan, Dr. Etta Vaughan, Larry and Alfred Terry); thirteen grandchildren, 27 great-grandchildren; one great-great grandchild; a host of nieces, nephews, cousins and friends – too many to name but all loved just the same.

To send flowers to the family or plant a tree in memory of Aaron Terry Sr, please visit Tribute Store
Friday
24
June