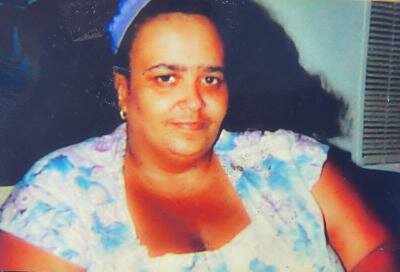 Please share a memory of Angela to include in a keepsake book for family and friends.
View Tribute Book

Angela Bridget Donald (Angie) was born in Newport News, VA on March 31, 1959 to Winona Newman-White and Andre Donald.  She departed this life peacefully on Monday, May 16, 2022.

Angie attended St. Anthony’s Catholic School, J.E.B. Stuary, Suitland High School, earning her diploma at T.C. Williams High School.  During her professional career, she worked as a taxicab driver for over 30 years with Diamond Cab, Yellow Cab, and White Top Cab companies in Alexandria, VA.  At the end of her career, she retired from White Top Cab company in 2018.  She was known for being a staple in the community as a driver transporting customers around locally and outside of the DC metropolitan area.  Angie had another name given to her by her community, Pocahontas because of her long silky hair.

During Angela’s years as a teen, she had a nurturing soul. Angie was like a mother to her siblings, taking extra care of them, along with her mother when she became ill. She was always willing to do, and give her last to others. Angie was very vocal and had a way with words. She did not bite her tongue, which was difficult for some.  Despite the fact, Angie spoke the truth! She was also a forgiving person and didn’t hold grudges.

As a young mother of four, Angela became a work horse. She worked tirelessly to provide her children the best. No matter how difficult times would be, she made a way. Her 12 to 14 hour work shift during the holiday season made Christmas magical! The annual 4th of July picnics was a time to remember. Angie loved the holidays, from decorating to hosting delicious meals. During the 1990's-2000's, the hard-working, tough- loving, disciplinarian mother would eventually witness the fruits of her labor. Her eldest son Kenneth would work for Coca Cola, pursue a career in culinary arts and became a tattoo artist. her younger son Linwood would follow Angie’s guidance and become a teacher, while the eldest daughter Gena would become a loving pediatric nurse and her youngest daughter Jackie would become a technology specialist.

Angie loved politics, kept up with worldly affairs and was always up for a good debate!  During her leisure, she enjoyed cooking, gardening, sewing, making jewelry, listening to music, and playing games.  She had a sharp eye for solving jigsaw puzzles and was a wiz at math.  She was known for cooking a ‘mean’ sweet potato pie!  Her favorite shows were NBC’s Meet the Press, CBS Mornings with Gayle King, Wheel of Fortune, Young and the Restless, Price is Right, Tyler Perry’s Sistas, and Tyler Perry’s Have and Have Not’s.

Angie was always eager to help those in need.  Angie had a forgiving heart - that’s just the type of lady that she was.  Angie was a people-person and she thanked and appreciated those she was under the care of.  Her greatest joy was having a big family that she helped raise.

To send flowers to the family or plant a tree in memory of Angela Donald, please visit Tribute Store
Friday
3
June