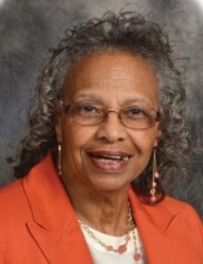 Carrie (affectionately known as “Tanzie”) married her hometown sweetheart, Joseph Wiggins, Jr. in 1958, who preceded her in death. Through this bond, three energetic sons were born: Calvin and Joseph III (both preceded her in death), and Craig Mario.  She also had a deep love for her loyal snack-buddy poodle companion, PJ. While she was the biological mother to her three sons, she was a fully committed, devoted, and loving mother-figure for several sons and daughters, including Anthony Baldwin (Cecilia), Kevin Harper (Robin), and Kisha Brown-Tuck (Melvin).

Carrie was a long-time resident of Hyattsville, Maryland where she lived in a caring community.  She had an extensive career, retiring with over 38 years of commendable service

as a Dietary Leader at Howard University Hospital, previously the historical Freedmen’s Hospital.

Carrie joined Mount Pleasant Baptist Church on October 1, 1972, under the Pastorate of the late Reverend Sydney T. Yancey.  She remained a faithful member of Mt. Pleasant Baptist Church for 49 years under the Pastoral leadership of Reverend Terry D. Streeter until she was called to eternal rest.  Carrie served as a longtime member of the 2nd and Sanctuary Choirs. She loved church, fellowshipping, and fun-filled times she shared with family and friends.

Carrie served as a Past Matron of Naomi Chapter No. 9 of the Order of the Eastern Star since September 26, 1995 and as a Worthy Matron in 2004. She maintained her membership until she was called to enter the mansion prepared for her when she went to her sweet and well-deserved rewards.

Carrie was known to everyone for her smile, laughter, and larger than life personality. She was a plant enthusiast who especially enjoyed keeping in touch with family, friends, and playing video games and find-a-word puzzles. Carrie was a true matriarch, emphasizing love and family, the importance of finding joy in life every day, and having hope in your heart. She was a generous spirit with a kind, virtuous soul. We will never forget her exceptional and beautiful life. Her memory and love will be in our hearts forever.

Donations in memory of Carrie Delois Wiggins may be made on-line to Mount Pleasant Baptist Church-Willing Heart Fund at www.mpbcdc.org.

To send flowers to the family or plant a tree in memory of Carrie Wiggins, please visit Tribute Store
Friday
7
May